About Universal Self Defence

THE UNIVERSAL SELF DEFENCE CONCEPT... On the 1st May 1983, the original concept of Universal Self Defence (USD) was first introduced by the now President of the Universal Self-Defence Academy (Usda), Mr Peter Burke.

It was a natural progression to develop Universal Self Defence after Peter Burke had trained and taught martial arts for over 14 years.

Peter Burke's enthusiasm for the martial arts began in 1965, at the very early age of 8 years old, with judo, karate and boxing. Later on he also trained in kungfu and with 3 World Champion kickboxers Joe Lewis, Bill Wallace and Benny Urquidez. He was also awarded Black Belt degrees from hapkido and taekwondo masters.

After a very successful instructing career teaching taekwondo, Peter Burke could see the potential for starting a system of training that did not restrict itself by just promoting one style of martial art. His idea was to use all methods that proved to work best in order to provide more practical and universal self-defence. This then created both the concept and the name 'Universal Self Defence". With the aid of modern sports science and through it's own research, the Universal Self Defence has since developed many of it's own ideas and methods. USD has evolved into a program that is easier to learn, safer and more practical for everyone.

Although the original concept was created by Peter Burke, the Universal Self Defence now grows and develops with all its dedicated instructors and members around Australia.

Since the formation of Usda, thousands of people across Australia from all walks of life have enjoyed and benefited from the Universal Self Defence training program. Many professional people including school teachers, law enforcement officers and security personnel have also enthusiastically given USD their strong support by becoming members and instructors.

Whilst teaching people how not to become a victim of violence, the disciplined USD training also encourages a more active, healthy and drug free lifestyle. 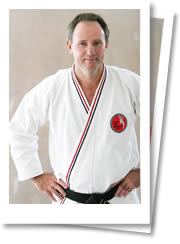 1965 First began martial arts training at 8 years of age with judo, then later in karate and boxing at a local Police Boys Club in Sydney Nsw.

1988 First 100 Usda Black Belts awarded.
World Karate and Kickboxing Champion Joe Lewis, also Black Belt Hall of Fame Fighter and Instructor of the year, martial arts movie star and living legend visits Usda. Whilst giving a seminar for Usda Black Belts, Joe Lewis was quoted as saying: "I've been all over Australia and this is the best club so far."

20xx Thousands of men, women and children across Australia have now enjoyed and benefited from USD training. Peter Burke, with over 40 years experience, continues as Usda President. Much credit must also go to all the dedicated Usda Black Belt instructors. Some have now have over 30 years experience and have a tremendous influence in the continued growth and development of what is now well recognised as a very innovative and unique training system; "Universal Self Defence".