Buy 4 or more 10% off all Karate uniforms sale now shows on checkout page. The karate uniform or karate Gi is the most popular type of martial arts uniform as many other martial arts styles prefer the loose fitting karate style jacket and pants.

Whether or not karate uniforms are lightweight, medium weight or heavyweight it is most important the uniform is not tight fitting in any area as that will restrict your movements and impede your performance.

Karate uniforms with the cross over jacket top are also used by many other martial arts schools apart from karate because the karate uniforms not only look good, they are both very practical and economical and there is always a good reliable supply of karate uniforms available. Having a reliable uniform supply for any martial arts club is extremely important as it is a major drama when you have to change the whole clubs standard uniform. For example the Universal Self Defence Academy (Usda) have not changed their regular uniform since 1983 and still like to use the standard karate uniform. There are also many Taekwondo schools that also still prefer to use the traditional karate uniform with the cross over jacket instead of the v-neck Taekwondo uniforms.

Kyokushin Karate Gi uniforms otherwise referred to as Kyokushinkai Karate Gi's are also available from the Universal Self Defence web store. They are basically the same as your traditional cross over jacket style karate uniform except they have the traditional Kanji script embroidery down the front of the jacket which says Kyokushinkai written in Japanese calligraphy. 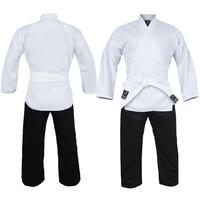 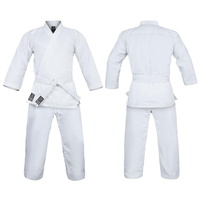