Taekwondo uniforms are made tough and streamlined with a V-Neck Taekwondo style jacket and are designed for fast high performance action particularly with the spectacular kicking that Taekwondo is most famous for. The Taekwondo uniform pants and belt are usually the same style as the karate pants and karate belt.

The beginners and intermediate grades usually wear an all white Taekwondo uniform with whatever colour belt that represents their grade or rank. Black belts and instructors like to stand out more from the coloured belts of the general class so they often vary their Taekwondo uniforms with black piping mostly around the V-Neck.

There many variations of Taekwondo uniform protocols with the various different Taekwondo clubs and organisations so make sure you check what is the most appropriate uniform to wear at your Taekwondo school.

At the Universal Self Defence martial arts webstore you can find and buy some of the most popular Taekwondo uniforms for kids and adults that are great for Taekwondo kicking.

You can also purchase just the pants for Taekwondo which are the same as the karate pants and the karate coloured belts which Taekwondo also use to wear with your Taekwondo uniform.

Whenever you wear a Taekwondo uniform if you want to kick higher then it helps if you wear your pants up higher to make full use of the special gusset panel that is sewn into the couch of the karate or Taekwondo pants.

With the name Taekwondo meaning firstly Tae for feet, then Kwon for hands and Do for the way or art it is not hard to understand why the art of Taekwondo or Tae Kwon Do TKD is so spectacular as it concentrates firstly on the most explosive and dynamic martial art kicks. So it is very important that Taekwondo uniforms are worn loose and are made light, tough and durable so they do not restrict or slow down the Taekwondo kicker.

When buying Taekwondo uniforms use the size chart as a guide which goes by the height of an average medium built person. If the build is more broad then you may need to go a size higher and take up the arms and legs so its a good fit around the body and so you can move freely on the uniform. 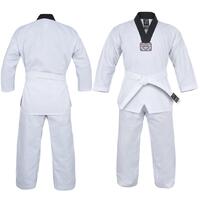